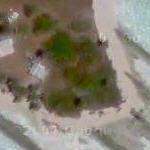 By kjfitz @ 2010-11-30 16:38:35
@ -12.08174, 96.845083
Horsburgh Island, Cocos (Keeling) Islands (CC)
On the night of 8–9 May 1942, fifteen members of the garrison, from the Ceylon Defence Force, mutinied, under the leadership of Gratien Fernando. The mutineers were said to have been provoked by the attitude of their British officers, and were also supposedly inspired by anti-imperialist beliefs. They attempted to take control of the gun battery on the islands. The Cocos Islands Mutiny was crushed, although the mutineers killed one non-mutinous soldier and wounded one officer. Seven of the mutineers were sentenced to death at a trial which was later alleged to have been improperly conducted. Four of the sentences were commuted, but three men were executed, including Fernando. These were to be the only British Commonwealth soldiers executed for mutiny during the Second World War.
Links: en.wikipedia.org
701 views