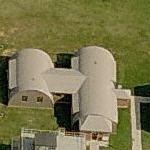 By kjfitz @ 2007-08-16 14:33:21
@ 39.784169, -84.108979
Dayton, Ohio (OH), US
American airpower based in England in World War II involved the 8th Air Force, providing strategic airpower with bombers and fighters, and the 9th Air Force, performing tactical ground-attack and support missions. Both organizations had many bases, and thousands of American airmen lived and worked in more or less temporary structures like the "Nissen huts" on display at the museum. These particular huts were used at Debden, near London in southeastern England.
Links: www.nationalmuseum.af.mil
677 views