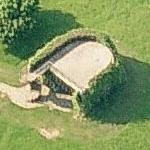 By mlc1us @ 2010-02-26 09:27:56
@ 52.27054991, 10.55567874
Brunswick, Germany (DE)
The civilian leadership of the city built this observation bunker in Braunschweig in 1943 - the work was performed by concentration camp prisoners. The U-shaped concrete bunker was built on the side of the Nußberg hill at the Franzsches Feld (near the 1935 Thingplatz) overlooking the city, and was used to observe bombing attacks and quickly identify the resulting fire locations. It had underground entrances and connections to other nearby bunkers. The bunker has had part of the back removed and now has an added stairway and railing, and wooden slats have been added to the walls for ivy.
Links: www.thirdreichruins.com
644 views