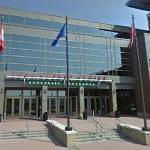 By Matheus_ @ 2012-01-02 11:54:23
@ 44.943815, -93.101087
St Paul, Minnesota (MN), US
The Xcel Energy Center is a multi-purpose arena located in Saint Paul, Minnesota. It is named for its locally-based corporate sponsor Xcel Energy. With an official capacity of 18,064, the arena has four spectator levels: one suite level and three general seating levels. The arena is owned by the city of Saint Paul and operated by Minnesota Sports & Entertainment. Home to the NHL's Minnesota Wild and the NLL's Minnesota Swarm, it is on the same block as the RiverCentre convention facility, Roy Wilkins Auditorium, and Ordway Center for the Performing Arts in downtown St. Paul.
Links: en.wikipedia.org
679 views