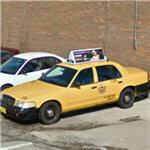 By kjfitz @ 2010-04-21 14:00:56
@ 41.900669, -87.656691
Chicago, Illinois (IL), US
The original Yellow Cab Company based in Chicago, Illinois is one of the largest taxicab companies. Independent companies using that name (some with common heritage, some without) operate in many cities in a number of countries. Many firms operate with drivers as independent contractors. In some cities, they are operated as cooperatives owned by their drivers.

Related companies include The Hertz Corporation, YRC Worldwide and the Chicago Motor Coach Company, which was acquired by the Chicago Transit Authority.
Links: en.wikipedia.org
436 views