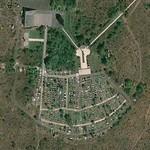 By Dania @ 2010-07-26 15:20:11
@ 40.159837, 44.454632
Yerevan, Armenia (AM)
Yerablur (Armenian: Եռաբլուր) is a military cemetery located on a hilltop in the outskirts of Yerevan, Armenia. Since 1988, Yerablur has become the home of the Armenian soldiers who have lost their lives during the Nagorno-Karabakh war. Many famous Armenian heroes are buried in this military cemetery including Vazgen Sargsyan, (Defense and Prime Minister of Armenia from 1992-1999), Monte Melkonian (famed Armenian military commander in the Nagorno-Karabakh war) and Andranik Ozanian (an Armenian general and freedom fighter in 1910's). Also Lieutenant Gurgen Margaryan is buried in this cemetery, (who was axed while asleep by Azerbaijani participant Ramil Safarov in Budapest, Hungary on February 19, 2004 who was participating in Partnership for Peace (PfP) NATO-sponsored program).
Links: en.wikipedia.org
1,035 views