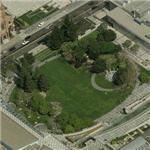 By kjfitz @ 2011-03-08 16:38:00
@ 37.78502691, -122.40258914
San Francisco, California (CA), US
Yerba Buena Gardens is the name for two blocks of public parks located between Third and Fourth, Mission and Folsom Streets in downtown San Francisco, California. The first block bordered by Mission and Howard Streets was opened in 1993. The second block, between Howard and Folsom Streets was opened in 1998. A pedestrian bridge over Howard Street connects the two blocks, sitting on top of part of the Moscone Center convention center. The Yerba Buena Gardens are owned by the San Francisco Redevelopment Agency and were planned and built as the centerpiece of the Yerba Buena Redevelopment Area.
Links: en.wikipedia.org
648 views