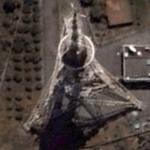 Installation of the tower in 1977 allowed to receive wide variety of programs from the Moscow Central television, as well as from other Soviet Union republics. The average daily length of programs broadcasted by Armenian television reached twelve hours, of which two and a half hours in color, including four hours thirty five minutes of own programing. Ninety six percent of the population watched the first program. In 1978 it became possible to also receive the fourth channel of the Central television in Armenia.
1,250 views