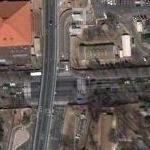 The garrison comprises 2.5 km². (630 acres) in the heart of Korea's capital, with a golf driving range, four-star hotel and 440,000 square m (4.7 million square ft) of floor space in hundreds of buildings. The garrison is made up of two main parts, Main Post (North Post) and South Post, which are physically divided by a four-lane boulevard that links two Seoul districts together. In January 2004 a major bridge was constructed over this boulevard to solve traffic congestion problems.

Camp Coiner, covering approximately 50 acres (200,000 m2) on Yongsan Garrison's northern edge, is named after 2nd Lt. Randall Coiner, a Korean War Silver Star recipient. Since the Korean War it has served as Korea's primary inprocessing facility for Army troops. Camp Coiner has been a self-sufficient compound with its own network of barracks, shopping, and entertainment, though in recent decades it has become more integrated with Yongsan Garrison.

Yongsan Garrison is located within Yongsan-gu district of Seoul. East of the garrison is the commercial district of Itaewon, with its westernized shopping and nightlife. To the west of Yongsan is the Samgakji subway station and Yongsan Electronics Market.
Links: en.wikipedia.org
11,465 views