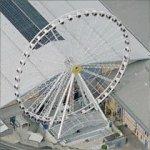 By mlc1us @ 2007-12-28 19:09:11
@ 53.960324, -1.095512
York, United Kingdom (GB)
The Yorkshire Wheel, previously known as The Manchester Wheel before its relocation, is an observation wheel in York, England, which opened to the public on April 12, 2006, following setbacks due to bad weather. It is located at the National Railway Museum where it was built by World Tourist Attractions who also ran the Wheel of Birmingham.

It is the first observation wheel of its kind in Yorkshire and was inspired by the London Eye, which opened a few years earlier. The Wheel is 54 metres high, which is about the height of York Minster, York's skyline height limit, but somewhat smaller than the London Eye at 135 metres.
Links: en.wikipedia.org
2,124 views