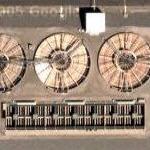 By kjfitz @ 2005-07-29 12:21:25
@ 32.725929, -114.704293
Yuma, Arizona (AZ), US
A desalinization plant, one of the largest in the world, built to take salt out of the Colorado River before it trickles into Mexico. The plant, constructed by the Federal government for $256 million, was promised to Mexico because the river is so salty by the time it crosses the border that Mexican farmers find it dangerous to use on their crops. This was due to salt contamination from throughout the lower Colorado region desert agriculture, but primarily from the intensive agriculture in the arid Welton Mohawk district, east of Yuma, which flushes the salt--the residue from evaporation--out of its fields, directly into the Colorado. The plant, conceived of in the late 1970's, and finished in 1992, operated for only eight months, before laying idle again, due to a number of factors, including flood damage on some of the region's drainage ditches, wet weather naturally diluting the salty water, and the $30 million annual expense of operating the plant.
Links: clui.org
2,535 views