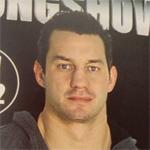 Since his pro hockey career began in 2002, Konopka has played for 6 different NHL teams and 8 minor league teams. After being passed up in the NHL draft, he worked his way through the minor league system, eventually making his NHL debut in 2005 with Anaheim. He would spend a few more seasons in the minors with occasional short stints in the NHL. Since 2009, he has been a full-time NHL player.