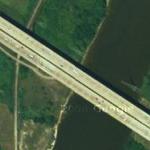 By kkeps @ 2010-11-26 09:25:43
@ 43.482648, -83.9116
Zilwaukee, Michigan (MI), US
The Zilwaukee Bridge is a high-level, segmental concrete bridge spanning the Saginaw River in Zilwaukee, Michigan, which is a short distance north of Saginaw, Michigan, United States. The current eight-lane structure, completed in 1988, is the second such bridge at this location, replacing a four-lane bascule bridge constructed in 1960. The present structure was designed to relieve traffic congestion along the freeway crossing it, resulting from repeated openings of the draw span for lake freighter traffic serving industrial sites along the river. The Zilwaukee Bridge is approximately 8,000 feet (2440 m) in length and rises 125 feet (38 m) at its highest point.
Links: en.wikipedia.org
1,041 views