Back in 2007 after Microsoft release Bird’s Eye View imagery of areas in northern Italy member Effi posted a shot of a helicopter in flight which was followed shortly with a second view by moderator TexasAndroid. The two posts sparked an interesting bit of sleuthing. 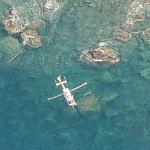 © Bing Maps
Helicopter over the sea 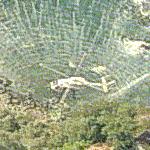 What evolved was a dramatic rescue by the Italian Coast Guard of a diver involving multiple boats and a helicopter extraction. Follow along…

On the first pass by the BEV airplane the Italian Coast Guard has already arrived and two people in a skiff can be seen nearby (the rescue). The skiff then races to shore with the men. Once ashore a helicopter arrives and hovers over the shore. Meanwhile only a few hundred meters away (and in the same image) two speedboats also rush to the scene. Finally the helicopter flies off towards safety just as the speedboats arrive.

(Special thanks to Pdunn for assembling the time-line.)