The Queen chose the motto: God’s help, the love of The People, Denmark’s strength.

Margrethe II was the second female ruler in the history of Denmark since Queen Margrethe I in the years 1375 to 1412. 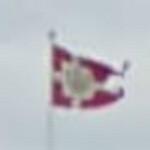 © Google Maps
Flag of the Queen of Denmark