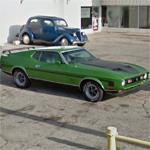 The Mach 1 version of the Mustang was a performance package that Ford offered from 1969-78 and was reintroduced in 2003-04.

A red version of this car appeared in the 1971 James Bond film Diamonds are Forever, in which the Mustang escaped a police chase by driving on two wheels through a narrow alley. The filmmakers goofed in making the scene. The car drove on its right side tires at the beginning of the stunt, but it exited the alley on its left side tires.
Links: en.wikipedia.org, www.youtube.com
400 views