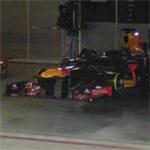 By milwhcky @ 2014-06-21 18:13:58
@ 47.22043, 14.76666
Spielberg, Austria (AT)
A 2013 Formula One race car from Infiniti Red Bull Racing is seen in the garage at the Red Bull Ring race course. The team won the constructor's title and the driver's title with this car. Sebastian Vettel captured his fourth consecutive title, while his teammate Mark Webber finished 3rd in the final standings.

Red Bull lost its dominance over the other Formula One teams in 2014 as the team struggled to adapt to widespread changes to the rule book.

After ten years without an Austrian Grand Prix, an event at this circuit was added to the Formula One calendar in 2014.
Links: en.wikipedia.org
533 views