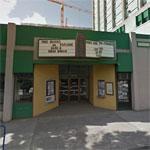 By jbottero @ 2013-04-23 17:56:26
@ 45.510258, -122.68268
Portland, Oregon (OR), US
5th Avenue Cinema is Portland State University's cinema house screening an eclectic selection of camp, cult, classic, and contemporary independent and mainstream films. Oregon's only student run cinema has been operating non-profit since 1989. 5th Ave's goals are to provide further education for PSU students interested in film, as well as a fun place for people to see something they wouldn’t ordinarily get to see on the big screen. The general public is always invited to attend and there is FREE popcorn at every show. Films are never digital and are presented on 35mm film, with the occasional screening on their rare Norelco 16mm projector.

The cinema was originally part of the Moyer theater chain and, according to patrons who have come to the cinema since the early 70s (when the theatre changed names from Cini-Mini to 5th Avenue Cinema), was one of Portland's major art house cinemas, along with Cinema 21, throughout the 70s and early 80s.

In the 80s the theater was shut down and bought by Portland State University. A group of students formed the PSU Film Committee and re-opened the 5th Avenue Cinema in 1989.
Links: 5thavenuecinema.org
542 views