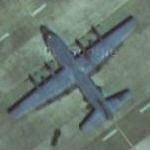 The AC-130 is an excellent fire support platform with outstanding capabilities. With its extremely accurate fire control system, the AC-130 can place 105mm, 40mm and 25mm munitions on target with first round accuracy. The crew of these aircraft are extremely proficient working in military operations in urban terrain [MOUT] environments. Many ground units have begun to use Infra-red (IR) tape either as arm bands or sewn to the top of their ballistic helmet for marking troops and vehicles, especially when working with the AC-130. It only takes a very small piece of IR tape to be distinguished as friend or foe by an AC-130, and anything larger than a one inch by one inch piece is going to white out a large portion of the monitor aboard the aircraft.
Links: www.globalsecurity.org, www.verslo.is
1,142 views