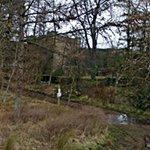 By Hinkkanen @ 2012-10-21 05:08:46
@ 55.392356, -2.017152
Alnham, United Kingdom (GB)
Peel towers (also spelt pele) are small fortified keeps or tower houses, built along the English and Scottish borders in the Scottish Marches and North of England, intended as watch towers where signal fires could be lit by the garrison to warn of approaching danger. By an Act of Parliament in 1455, each of these towers was required to have an iron basket on its summit and a smoke or fire signal, for day or night use, ready at hand.

This particular one was converted to private house sometime in the 19th century.
Links: castlefacts.info
865 views