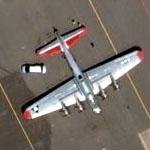 "Aluminum Overcast, B-17G-105-VE, 44-85740 , civil registration N5017N, is a surviving B-17 Flying Fortress. It is owned by the Experimental Aircraft Association (EAA), and it tours the U.S.A. and Canada offering flight experiences. Although never amassing a combat record, and barely escaping the fate of many aircraft that were scrapped after World War II, Aluminum Overcast has become one of the most recognizable examples of the type, due to its extensive touring schedule with over one million flight miles accumulated. The painstaking overhaul and restoration of the airframe took more than 10 years and thousands of hours by dedicated staff and volunteers at EAA Oshkosh, Wisconsin, headquarters. Through its association with the EAA, the aircraft has become a living reminder of World War II aviation for many years to come. Aluminum Overcast proudly carries the colors of the 398th Bomb Group of World War II, which flew hundreds of missions over Nazi-held territory during the war. Aluminum Overcast commemorates B-17G AAF Serial No. 42-102515, shot down over France in 1944.[1]"
Links: www.youtube.com
974 views