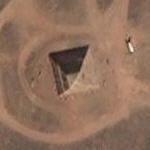 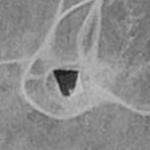 By kjfitz @ 2006-04-30 13:02:43
@ 41.131025, -105.397983
Laramie, Wyoming (WY), US
Oliver and Oakes Ames were 19th century industrialists (Oakes was known as the "King of Frauds") who, when they weren't producing shovels, were bribing Congress to finance the Union Pacific Railroad. The Railroad decided to show its appreciation by building a pyramid in their honor in 1882, out of native granite quarried from the site. Building a pyramid also kept Union Pacific Railroad workers busy, and it gave Union Pacific passengers something to look at in Wyoming.

The pyramid was designed by Henry Hobson Richardson, a big name in the 19th century. Giant portraits of the Ames Brothers, chiseled into opposite sides near the apex of the pyramid, were sculpted by August St. Gaudens, another favored fatcat who later designed the US $20 gold piece.

Time -- even railroad time -- humbles those who seek immortality. The Ames Brothers Pyramid was bypassed by the interstate, and the Union Pacific took away the tracks that ran nearby. Now range cattle use it as a backscratcher, and broken beer bottles show the respect with which Oliver and Oakes are held by modern-day fans of the Ames Brothers.
Links: www.roadsideamerica.com
2,193 views