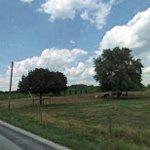 By kkeps @ 2012-07-24 18:14:03
@ 39.959764, -76.084583
Nickel Mines, Pennsylvania (PA), US
On October 2, 2006, a shooting occurred at the West Nickel Mines School, an Amish one-room schoolhouse in the Old Order Amish community of Nickel Mines, a village in Bart Township of Lancaster County, Pennsylvania. Gunman Charles Carl Roberts IV took hostages and shot ten girls (aged 6–13), killing five, before committing suicide in the schoolhouse. The emphasis on forgiveness and reconciliation in the response of the Amish community was widely discussed in the national media. The West Nickel Mines School was torn down, and a new one-room schoolhouse, the New Hope School, was built at another location.
Links: en.wikipedia.org
3,037 views