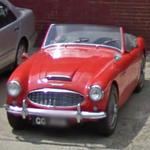 Austin-Healey produced cars until 1972 when the 20-year agreement between Healey and Austin came to an end. Donald Healey left the company in 1968 when British Motor Holdings (BMC had merged with Jaguar Cars in 1966 to form BMH) was merged into British Leyland. Healey joined Jensen Motors who had been making bodies for the "big Healeys" since their inception in 1952, and became their chairman in 1972.
Links: en.wikipedia.org
675 views