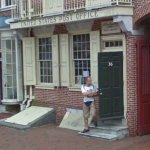 The post office is a part of Franklin Court, which also features a postal museum, an 18th Century printing and binding room, and a Benjamin Franklin museum. Franklin's former home stood in the courtyard, but was razed in 1812.

In 2011, the United States Postal Service announced that this post office is up for review for closure as part of their downsizing plan.
Links: www.ushistory.org, savethepostoffice.com
587 views