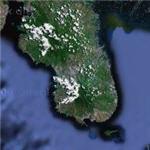 By kjfitz @ 2009-12-24 12:23:48
@ 14.640061, 120.450668
Balanga, Philippines (PH)
Bataan is a province of the Philippines occupying the whole of Bataan Peninsula on Luzon. The province is part of the Central Luzon region. The capital of Bataan is Balanga City and is bordered by the provinces of Zambales and Pampanga to the north. The peninsula faces South China Sea to the west and Subic Bay to the north-west, and encloses Manila Bay to the east.

The Battle of Bataan is famous in history as one of the last stands of American and Filipino soldiers before they were overwhelmed by the Japanese forces in World War II. The Bataan Death March was named for this province, where the infamous march started. This is also a location of Bataan Nuclear Power Plant located in Municipality of Morong.
Links: en.wikipedia.org
1,870 views