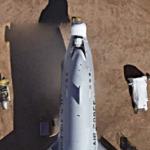 It made its final flight on February 14, 2012 to Davis–Monthan Air Force Base in Tucson, Arizona to be prepared and kept in storage at the "Boneyard."

On March 15, 2007, the YAL-1 successfully fired this laser in flight, hitting its target.

The U.S. Missile Defense Agency (MDA) on August 18, 2009 successfully fired the high-energy laser aboard the aircraft in flight for the first time.