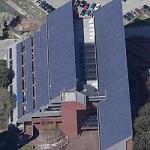 Located on the sloped roof of the south side of the building, ICC’s array of solar, or photovoltaic, panels encompasses a 3318 square-meter area, and, when in peak operation, provide over one-third of the energy to ICC, according to Victor Podbielski, the director of facilities.

University Architect Alan Brangman said that the large array — which, when first built was one of the largest photovoltaic arrays in the world — is comprised of 4,464 separate two-foot-by-four-foot modules. These solar cells operate by converting light from the sun’s rays into waves of energy that look similar to sine curves. Each string can generate up to 4.8 amps of DC power, which is then converted to AC power, which is used to power the building.

On a given day, Podbielski said, ICC uses approximately 720 kilowatts of energy, and the panels work in conjunction with the building’s conventional sources of power (supplied by an electricity grid that reaches into the D.C. region) to supply an average of 240 kilowatts of energy per day. The system starts by itself each morning when the sun rises, and shuts itself off at twilight as the sun wanes.

Under peak conditions, which occur during a cool, sunny day (the panels lose efficiency if their solar cells get too hot), they have the potential to generate 300 kilowatts of energy, yet their aging, as well as the effects of snow, shadows or other obstructions on the panels diminishes their efficiency over time.

At Georgetown, the university’s federal relations department partnered with the newly-consolidated U.S. Department of Energy to receive a federal grant that completely funded the construction of ICC’s photovoltaic panels, which, according to Brangman, cost a total of $10 million for the initial installation of the photovoltaic modules and their supporting structure. And so ICC building, which opened in 1982, was built with solar energy in mind.
Links: www.thehoya.com
2,293 views