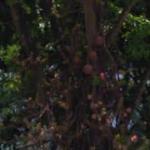 By mlc1us @ 2009-12-09 09:51:14
@ 1.281445, 103.841936
Singapore, Singapore (SG)
Evergreen tree allied to the Brazil Nut (Bertholletia excelsa), and is native to tropical northern South America and to the southern Caribbean. It part of the family Lecythiaceae. The Cannonball Tree is so-called because of its brown cannon ball-like fruits. The majority of these treesoutside of its native area have been planted as a botanical curiosity, as they grow very large, distinctive flowers. Its flowers are orange, scarlet and pink in color, and form in large bunches measuring up to 3 m in length. They produce large spherical and woody fruits ranging from 15 to 24 cm in diameter, containing up to 200 or 300 seeds apiece.
Links: en.wikipedia.org
579 views