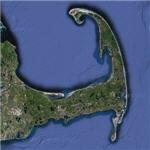 By kjfitz @ 2011-03-11 14:28:13
@ 41.808685, -70.129166
Cape Cod, Massachusetts (MA), US
Cape Cod, often referred to locally as simply the Cape, is an island and a cape in the easternmost portion of the state of Massachusetts, in the Northeastern United States. It is coextensive with Barnstable County. Several small islands right off Cape Cod, including Monomoy Island, Monomoscoy Island, Popponesset Island, and Seconsett Island, are also in Barnstable County, being part of municipalities with land on the Cape. The Cape's small-town character and large beachfront attract heavy tourism during the summer months.

Cape Cod was formed as the terminal moraine of a glacier, resulting in a peninsula in the Atlantic Ocean. In 1914, the Cape Cod Canal was cut through the base or isthmus of the peninsula, forming an island.
Links: en.wikipedia.org
2,625 views