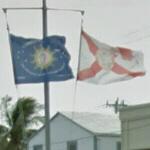 By daggerwell @ 2011-10-15 06:40:21
@ 24.560331, -81.806224
Key West, Florida (FL), US
"The Conch Republic was established by secession of the Florida Keys from the United States of America, on April 23rd, 1982 in response to a United States Border Patrol Blockade setup on highway U.S.1 at Florida City just to the north of the Florida Keys. This heinous act effectively isolated Keys Citizens from the U.S. mainland since the blockade was on our only land artery to and from the mainland. This roadblock portrayed Keys residents as non-U.S. citizens who had to prove their citizenship in order to drive onto the Florida mainland! Hardly an American thing to do!"
Links: www.conchrepublic.com
785 views