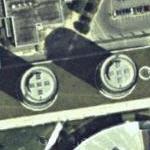 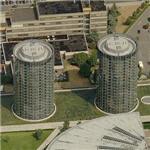 The Autostadt is the area around the Volkswagen factory in Wolfsburg, Germany that has been built up into something akin to a theme park. It features a museum, feature pavilions for each manufacturer in the Volkswagen Group, a customer centre where German customers can pick up new cars and take a tour through the enormous factory.

This is Volkswagon's new car storage facility. The actual space that the facility occupies is approximately only 20% of a comparable facility with the traditional design that is used primarily in the US. Not only is the German structure less expensive to build, but vehicles are also "retrieved" in less time and without the potential of being damaged by an attendant. Collecting your new car is an event in itself. "In a fully automated procedure, your new car is brought down to you from one of the 20-story Car Towers. Large signboards in the Customer Center show you when your turn has come. Then, you're handed the keys, your picture is taken, the glass doors open and your brand-new car appears. You're all set to go". [by Billy T]

There are two huge towers as well which are filled with new Volkswagens. The two towers are connected to the Volkswagen factory by a 700 metre underground tunnel. When cars arrive at the towers they are carried up at a speed of 1.5 metres per second.
Links: www.thecoolhunter.net, armchairtravelogue.blogspot.com
1,530 views