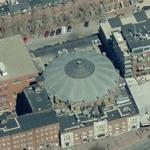 The building was commissioned by Charles F. Willoughby's Boston Cyclorama Company to house the Cyclorama of the Battle of Gettysburg, a 400-by-50 foot cyclorama painting of the Battle of Gettysburg. It was designed by Charles A. Cummings and Willard T. Sears. The central space is a 127'-diameter steel-trussed dome which, when it was built, was the largest dome in the country after the United States Capitol building.
Links: en.wikipedia.org
633 views