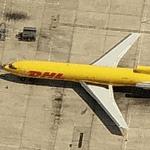 The trio initially provided a courier service between the Continental United States and Hawaii then expanded the business from there. In 1998, Deutsche Post began to acquire shares in DHL, finally reached majority ownership in 2001, and completed the purchase in 2002.
979 views