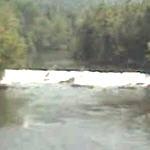 By Parabellum @ 2010-02-18 16:47:58
@ 35.366953, -83.251554
Dillsboro, North Carolina (NC), US
Duke Energy continued demolition of the Dillsboro Dam over the past week. “We’ve made really good time and are pleased with how quickly it’s gone,” said Fred Alexander, Duke’s district manager for government and community relations. Turbidity levels have been monitored all during demolition, and sediment has not been a significant issue, Alexander said. Over the past week, crews moved operations from the north (powerhouse) side of the dam and began work on the south side and have begun removing the dam’s foundation stone from the Tuckaseigee River, Alexander said. “The weather has cooperated, and interesting water features not seen since 1927 are becoming visible,” he said. Dam removal, which began Feb. 3, is expected to be complete by March 31.
Links: www.thesylvaherald.com
1,307 views