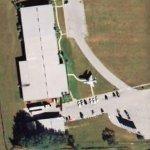 About the plane seen in this view:
Naval Aviation News, Jan-Feb, 2003 by Ed Wright
What do drag racing and Naval Aviation have in common? More than you may think. Besides the fact that a dragster and a Navy jet can both travel at more than 300 miles per hour, they are related because of the work of one drag racing legend, "Big Daddy" Don Garlits.

The 1997 International Drag Racing Hall of Fame inductee owns the Don Garlits Museum of Drag Racing in Ocala, Fla. He has added some muscle to his growing collection of Navy memorabilia with the addition of an A-7A Corsair II (BuNo 152650) mounted on a pedestal in front of the museum. The aircraft sports a plaque that states "it was the first A-7 to make a carrier arrested landing on board America (CV 66) in 1966."

After its retirement in 1978, the plane was mounted on a pedestal at NAS Cecil Field, Fla. When the base was later closed, it was known that Garlits was interested in obtaining an airplane for his museum, so the Navy loaned him the Corsair II for display. But his dream was short-lived when a tornado touched down and ripped the plane from its stand. The A-7 flipped over and sustained extensive damage.

Navy personnel recommended that he scrap it and offered to find him another aircraft. But because he liked this particular one and its history, Garlits decided to fix it. He explained, "I got help from the people in my shop and a volunteer from the community. We repaired, repainted and remounted the plane in its current location outside the museum. It took us nearly eight months to complete the work." He then added a special touch, a high-powered floodlight to make it stand out at night. "It is really beautiful," he said.

Garlits also has other Navy memorabilia in his museum. There is a Navy "recruiting" booth that is 25 feet long by 10 feet tall. He hands out to the public something he calls a "hero card," which shows his dragster aboard Ranger (CV 61). The card has a tear-off portion that can be mailed to request information on joining the Navy. There is also an engine from a Navy helicopter in one of his dragsters on display, as well as antique Navy recruiting posters.

Garlits got interested in the Navy after he toured U.S. military installations in Vietnam in 1971. The following year, the Navy Recruiting Command asked him to pose with his dragster for a recruiting poster. In recognition of his efforts, he was made an Honorary Navy Recruiter. The now-famous poster photo taken of Garliz "dragging" an A-7 Corsair II aboard Lexington (CV 16) appeared in the March 1972 issue of Naval Aviation News. In 1980 he was featured in Hot Rod magazine on board Ranger, where he was photographed in his dragster while "racing" an F-14 Tomcat. This photo appeared on the back cover of NANews, May 1980. A 1983 photo shoot aboard John F Kennedy (CV 67) produced a recruiting poster and another story in Hot Rod.

Naval Aviation supporters come from all walks of life. After 30 years, "Big Daddy" Don Garlits says he will continue to be an ambassador for the Navy, and he hopes his museum will help inspire young people to serve their country.
Links: garlits.com, www.findarticles.com, www.roadsideamerica.com
3,400 views