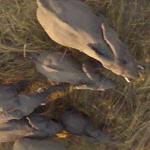 Zakouma National Park is located on an immense plain, across which the Bahr Salamat and its tributaries flow from north to south. The Government and the EU have restocked and refurbished the park since it was ravaged by civil war and poachers. Visitors can now see huge flocks of elephants, giraffes and lions.

Since 1989, the Zakouma National Park in south-east Chad has been undergoing restoration in a programme supported by the EU. Devastated by a decade of conflict, this wildlife sanctuary of nearly 3000 square kilometres was little more than a huge graveyard in 1986 when Pierre Pfeffer of the Paris Natural History Museum visited it and decided to campaign for its restoration. Today, this is recognised to have been a sensible decision. It is acknowledged that wildlife are better off when they have a reasonably large area in which to live, away from human activity. Aerial counts made in 1986, 1991 and 1995 confirm that animal numbers are on the increase in the park and that irreversible destruction has been averted. Currently, Zakouma is the only area effectively being protected in Chad. The other designated sites (one park and seven reservations) remain impoverished and in a state of near-devastation.
24,687 views