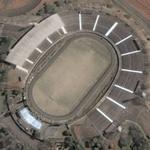 By adrbr @ 2008-06-03 14:32:08
@ -23.282158, -51.165149
Londrina, Brazil (BR)
The Estádio Jacy Scaff, usually known as Estádio do Café, is a football stadium inaugurated on August 22, 1976 in Londrina, Paraná, with a maximum capacity of approximately 45,000 people. The stadium is owned by the City Hall of Londrina, and is the home ground of Londrina Esporte Clube and Associação Portuguesa Londrinense. Sociedade Esportiva Matsubara also plays at the stadium. Its formal name honors Jacy Scaff, who is a former president of Londrina Esporte Clube. Its nickname, Café, is due to coffee being one of the most important goods exported by Londrina city.