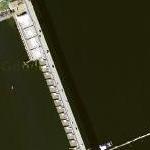 By kkeps @ 2011-07-20 19:10:45
@ 35.791527, -84.24208
Lenoir City, Tennessee (TN), US
Fort Loudoun Dam is a hydroelectric dam on the Tennessee River in Loudon County, Tennessee, in the southeastern United States. The dam is operated by the Tennessee Valley Authority (TVA), which built the dam in the early 1940s as part of a unified plan to provide electricity and flood control in the Tennessee Valley and create a continuous 652-mile (1,049 km) navigable river channel from Knoxville, Tennessee to Paducah, Kentucky. It is the uppermost of nine TVA dams on the Tennessee River. The dam impounds the 14,600-acre (5,900 ha) Fort Loudoun Lake and its tailwaters are part of Watts Bar Lake. The generating capacity of Fort Loudoun Dam is enhanced by the Tellico Reservoir, from which water is diverted via canal to Fort Loudoun Lake.
Links: en.wikipedia.org
1,963 views