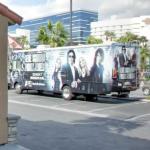 By kjfitz @ 2013-02-18 19:55:36
@ 36.107746, -115.152998
Las Vegas, Nevada (NV), US
Gene Simmons Family Jewels is an American reality television series that premiered on A&E on August 7, 2006. The show follows the life of KISS bassist and vocalist Gene Simmons, his longtime partner and wife Shannon Tweed, and their two children, Nick and Sophie. Although it is presented as a reality series, it has been noted that some events shown on the show did not actually occur. One of these events was depicted in the finale of Season 3, where the viewer is led to believe that Gene purchased the Australian Football team Carlton Football Club, while in reality there is no record of the team being sold to him. In addition to this, the episode shows Gene convincing Brendan Fevola to join Carlton Football Club, while in reality Fevola had been playing for Carlton since he was drafted in 1998. Other events include casting biker extras, as well as a bit actor in the show.
Links: en.wikipedia.org
684 views