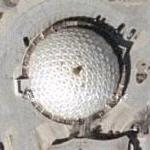 Once threatened with demolition, it has now been redeveloped into an Asian cultural center complete with office space, retail, restaurants and an exhibit on the works of Buckminister Fuller planned for the vault of the former Citizen's Bank.
Links: www.golddomemcs.org
1,975 views

Anonymous
@ 2010-11-24 10:25:10
The Gold Dome in Oklahoma City houses a multicultural society whose mission is to increase cross-cultural awareness in ALL cultures through the use of education, communication and creative artwork. The building is also a thriving business center and home to many businesses.

Anonymous
@ 2011-04-30 12:36:25
If you check out their website or their Facebook page they have events that are open to the public and will do tours of the building which are pretty interesting. I also heard a new restaurant is moving in this fall.