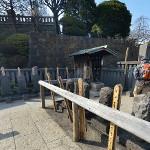 By WacoKidd110 @ 2014-05-27 14:18:47
@ 35.637104, 139.736647
Tokyo, Japan (JP)
This is the final resting place of the 47 Ronin and their leader Ōishi, who was buried here first. Their story is still celebrated in Japan today as the best known story of the code of honor of the Samurai. After their master was ordered to commit seppuku (ritual suicide) following a altercation with a another leader, some of his remaining men swore revenge. December 14th every year the temple where they are buried, Sengakuji Temple, holds a commemorative festival
Links: en.wikipedia.org
1,295 views