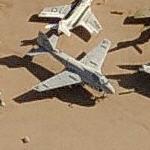 By kjfitz @ 2007-11-22 12:47:43
@ 32.140117, -110.867146
Tucson, Arizona (AZ), US
Designing of the A-6 began in 1957 in response to a U.S. Navy request for an aircraft to replace the Douglas Skyraider. The prototype A2F-1 Intruder flew on April 19, 1960. In 1962, the Intruder was redesignated as the A-6 under the joint Navy/Air Force designation system. Production of the A-6E version of the intruder began in December 1970, though many earlier A-6A aircraft were converted to A-6E standards. The A-6E featured up-graded targeting sensors and computers as well as new engines. Eventually the TRAM (Target Recognition Attack Multi-sensor) turret was installed in the Intruders to provide even better target recognition at night and in bad weather using infrared cameras and laser target designators.
Links: pimaair.org
456 views