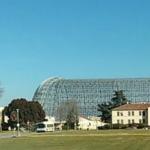 After months of planning and preparation, work to remove the exterior panels began in April 2011, requiring "the biggest scaffolding job in the history of the West Coast." The work was completed in mid-2012.

In September 2011, Google top executives Larry Page, Sergey Brin and Eric Schmidt proposed paying the full $33 million cost of revamping Hangar One, in exchange for being able to use up to two-thirds of the floor space to shelter eight of their private jets.

In September 2012, it was reported that proposals to restore the hangar had been rejected by NASA administration, and that the government would instead direct its efforts toward selling the Moffett facility.
Links: en.wikipedia.org
755 views