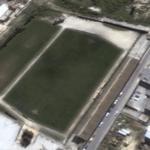 By adrbr @ 2008-06-09 09:25:41
@ 35.882918, 14.513218
Paola, Malta (MT)
Hibernians Ground is a multi-use stadium in Paola, Malta. The Hibernians football ground was inaugurated on the 9th of November 1986.Hibs became the first Maltese club to own his own football pitch. Thus having their own football pitch Hibernains play their league matches in the National Stadium in Ta’Qali, since all the Premier League matches are played there. Now-a-days this football ground is used by Hibernians for their everyday training sessions, the M.F.A. uses this pitch to play it’s first division matches on it. Recently this ground hosted even the Maltese national rugby team. Hibs played their first European match on this pitch on the 23rd July 1996 when they played against Uralmash Ekateringburg in the Intertoto Cup, losing the match 2-1. The stadium holds 8,000 people
Links: www.geocities.com, en.wikipedia.org
2,074 views