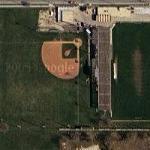 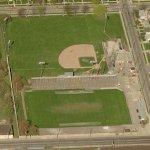 By AKpilotEMT @ 2005-12-01 07:00:01
@ 42.741576, -87.801661
Racine, Wisconsin (WI), US
Off-campus home field of William Horlick High's football and baseball teams. Opening prior to 1922, this site first featured just a baseball diamond and then later in the century the property was reconfigured for two sports by repositioning the baseball field and adding the 8,500 seat football stadium (which is also the home field of the Racine Raiders of the North American Football League.) Before reconfiguration, from 1943-1950 Horlick Field was the home of the Racine Belles of the All American Girls Professional Baseball League which was immortalized in the 1992 Tom Hanks movie A League of Their Own.
Links: en.wikipedia.org
1,320 views