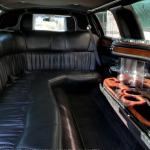 By kjfitz @ 2013-02-18 20:22:53
@ 36.155471, -115.149321
Las Vegas, Nevada (NV), US
A limousine (or limo) was originally an "enclosed automobile with open driver's seat," and was named from the French limousine (in the Occitan language) that was originally an adjective referring to a region in central France. The automobile meaning evolving from a type of cloak and hood that was worn by the inhabitants of the Limousin region that later resembled the covering of a carriage and much later used to describe an automobile body with a permanent top that extended over the open driver's compartment. The chassis of a limousine may have been extended by the manufacturer or by an independent coachbuilder. These are called "stretch" limousines.
Links: en.wikipedia.org
591 views