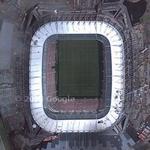 By adrbr @ 2013-06-12 17:16:17
@ -8.040884, -35.008203
São Lourenço da Mata, Brazil (BR)
Itaipava Arena Pernambuco is a new multi-use stadium in the Western suburbs of the Recife metropolitan area, in São Lourenço da Mata, Brazil, that is currently in the building stages. Once completed, it will be used mostly for football matches and will be used to host matches during the 2014 FIFA World Cup. The stadium will have a capacity of 46,160 people. In 2012 Clube Náutico Capibaribe, one of three professional football clubs in the Recife metro area, signed into agreement to become part owners of the new stadium. Beginning in July of 2013, Clube Náutico Capibaribe will play all of their home games at Arena Pernambuco.
Links: en.wikipedia.org, www.fifa.com
362 views