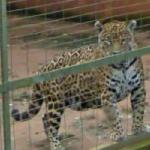 By Mike1989 @ 2013-09-27 03:28:41
@ -22.757124, -47.352945
Americana, Brazil (BR)
The jaguar (/ˈdʒæɡwɑr/ or UK /ˈdʒæɡjuː.ər/; Panthera onca) is a big cat, a feline in the Panthera genus, and is the only Panthera species found in the Americas. The jaguar is the third-largest feline after the tiger and the lion, and the largest in the Western Hemisphere. The jaguar's present range extends from Southwestern United States and Mexico across much of Central America and south to Paraguay and northern Argentina. Apart from a known and possibly breeding population in Arizona (southeast of Tucson), the cat has largely been extirpated from the United States since the early 20th century.
Links: en.wikipedia.org
316 views