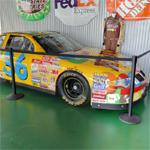 Schrader remains a very active driver, as he will appear at local short tracks around the country to compete in various types of race cars. He owns Missouri's I-55 Raceway and co-owns Illinois' Macon Speedway.
Links: en.wikipedia.org
595 views